Echo from 1939: A Texas High School and its Six-Man Football Team

I like looking at old school yearbooks, particularly those from the surrounding area where I live. Spend a little time turning the pages and see what kind of interesting history you dig up. Local ads reveal business history and photos of students and activities capture the culture of the day. Old yearbooks offer a time capsule between the covers. 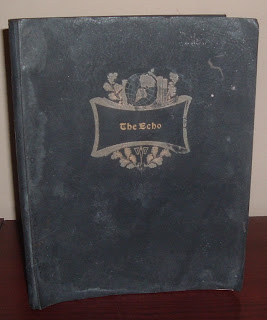 I was fortunate to find one of these time capsules last fall at a local book show where I was exhibiting. I say fortunate because this nondescript book lay hidden among more colorful, inviting covers on a bargain table. Many hands had touched it and brushed it aside to get to more substantial looking treasure. I picked it up for a quick inspection. Fingerspitzengefühl?

A bit beat up and soiled from decades of not-so-ideal care, The Echo, a 1939 Beasley, Texas High School Yearbook, was better preserved on the inside and provided a wonderful glimpse into rural Texas more than 70 years ago.

Paper covers opened to mimeographed text with old photos pasted onto the pages. This old yearbook is pretty much stripped down to the bone--no slick production with tons of content here--a reflection of the lean years of the Great Depression. But it's precisely what this yearbook doesn't have that makes it interesting from an historical and even cultural viewpoint.

The yearbook has about 50 pages and includes sections on Administration, Classes (less than 20 students in each), Athletics, Activities, and Advertising. 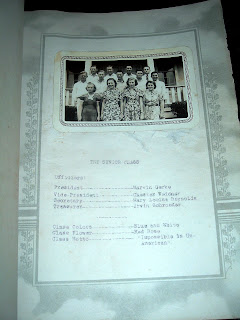 What really caught my eye, though, was the Athletics section and the old photos of the six-man football team.With so few students comprising each class, and the whole student body for that matter, the school would have been hard-pressed to field eleven boys on each side of the line of scrimmage, not to mention the extra cost for uniforms and equipment. The six-man version of the game was a perfect fit for Beasley High School in the late 1930s. 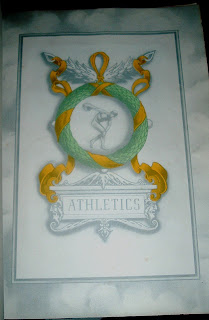 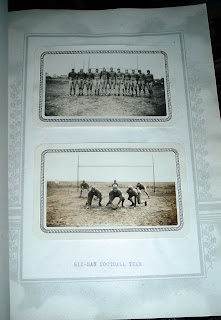 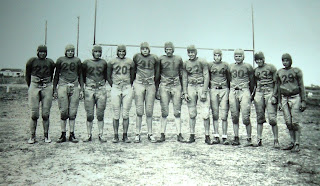 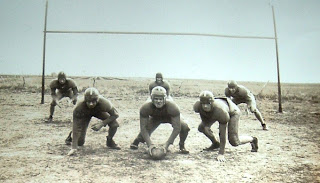 Six-man football wasn't invented in Texas, but Texas seems to have laid claim to it. The game was conceived by Stephen Epler in Chester, Nebraska back in 1934 in an effort to give small town schools short on players a chance to have a football team. So the eleven-man squad was cut down to six. The field's dimensions were shortened and a few new rules were instituted. This modified version of football was sanctioned by the University Interscholastic League in Texas four years later, in 1938. Play commenced that fall and the game spread rapidly across the vast rural areas of the Lone Star State.

The photos above are representative of the game in its inaugural year in Texas. As the yearbook in which I found them refers to the Senior Class of 1939, the Beasley six-man football team would have played their games  in the fall of 1938, making these photos some of the earliest images of six-man football in Texas.

Today, more than 150 schools, both public and private, still play six-man football. See the YouTube videos below (the second one an NFL trailer) for an idea of how the game has permeated small-town, rural Texas over the last seventy-plus years. 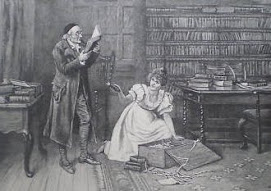